A 3-year-old was discovered locked inside a cage, and a 1-year-old was found holding drug paraphernalia. This happened as a search warrant was executed at a residence in Hocking County, Ohio.

Now, three adults have been apprehended.

On Sunday, deputies with Hocking County were going to search a home. This was in relation to a sexual assault investigation at a 32-acre property, in the city of Logan. Authorities stated that the residence was in “deplorable condition.”

Deputies say that they discovered the 3-year-old child, locked in a cage. It had been closed up with zip ties. Reports indicate that the cage contained bugs, soiled bedding, and a cup full of spoiled milk.

“We were actually trying to get what we thought was his sippy cup out for him. It had green spoiled milk inside of it. There were bugs that I care not even guess what they were inside of the Pack N Play itself,” stated one deputy.

A 1-year-old was discovered walking around the residence, carrying a methamphetamine pipe, as well.

Officials say that the children’s parents, Franklin “TJ” Varney, 38, and 25-year-old Megan Smith had fled the home. The sheriff’s office states that this was done because of their role with the sexual assault investigation. The parents were later found on the property Monday and were arrested. 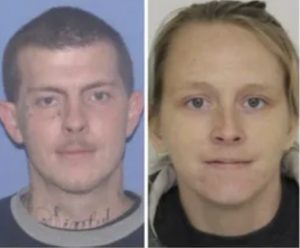 The children’s grandmother was identified as Ella Webb, 61. She had full custody of the children and was apprehended for endangering them.

Webb had been in the residence at the time. She said that she had locked the child up so that she could take a shower.

The sheriff office noted that both children have now been placed in emergency foster care.