31-year-old Anders Odegaard, of Warren, Minnesota, is facing second-degree murder charges after allegations that he beat and killed his ex-wife and mother of their five children.

On Tuesday, Carissa Odegaard was transported to Sanford Hospital in Fargo, North Dakota, where she was said to have “no significant brain function,” a criminal complaint documented. 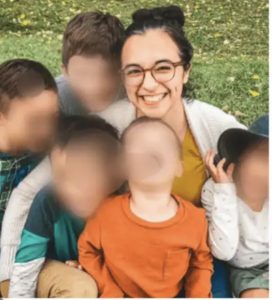 The children are aged 2 to 9 years old, and the couple have been divorced for close to two years. Documents show that the children had been at their father’s residence waiting for their mother.

Detectives say that the kids told police that their parents had a huge disagreement after their father wouldn’t allow the mother to take them to church. He then knocked her to the ground and began to strangle her. Carissa Odegaard instructed the children to call 911 as she had her 2-year-old child in her arms. One of the children had reported seeing the father attack the mother previously.

Two of the children went outside to try to get assistance. They got someone passing by to dial 911 because their mother was “bleeding really bad and needed help.”

Carissa Odegaard was discovered in the front doorway, suffering from head trauma. She was taken to a hospital where she was declared deceased on Wednesday evening.

Court records added that when authorities spoke with Anders Odegaard, an attorney, blood was observed in his hair. He was also half-naked. Authorities revealed that he would only say he didn’t “feel right.”

Anders Odegaard was apprehended at the location and taken into custody. His bail was set at $2.5 million.