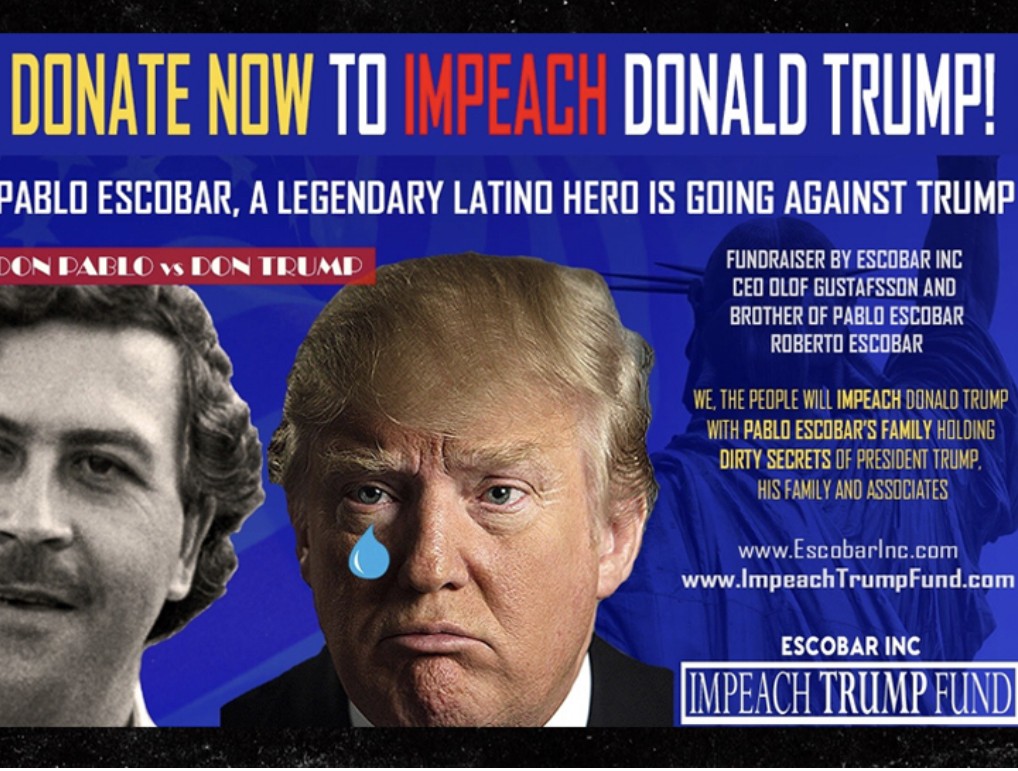 Family members of Pablo Ecobar want to have the 45th President of the US impeached as the US enters its 18th day of a partial government shutdown.

Robert Escobar (aka El Osito), founder of Escobar Inc, brother of Pablo Escobar, has started a GoFundMe campaign asking for $50 Million in donations in efforts to get US President, Donald Trump, impeached.

Robert and his associates at Escobar Inc. are soliciting anyone and everyone to pitch in donations to their GoFundMe campaign to finance ‘attorneys, lobby firms, and intelligence research’ that could lead to a downfall in Congress for Trump.

According to the GoFundMe site, the campaign was set up and is managed by Olof K. Gustafsson, the CEO of Escobar Inc.

Pablo Escobar is a South American also known as “Latino” legendary hero, who helped millions of people in his home country of Colombia and surrounding countries.
With the strong leadership of his company Escobar Inc, founded by his brother Roberto Escobar, we will push hard to get Donald Trump impeached.
So far, everything Pablo and his family have done have become multi-billion dollar successful ventures.

Robert claims to have some ‘dirt’ on Trump from previous alleged business relations with Trump and the Escobar Company.

It seems that Robert is pretty confident that he will get the job done.

Robert is quoted on the GoFundMe campaign page as saying:
“I have always gotten what I want. Everything. I know how to negotiate, and I have the power to get things done. Trump will be impeached.
I am the brother of a Latino hero, I have eliminated many people from power and helped the poor and will do so again.”

What we do know is the Escobars are indeed powerful people and have (allegedly) made some people disappear back in their day.