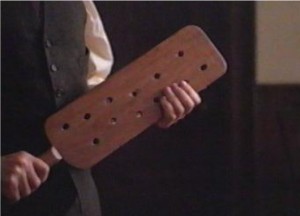 A Georgia charter school in Hephzibah, Ga is reportedly bringing paddling back into the schools.
Georgia School for Innovation and the classics received consent forms to paddle the students after a child’s third offense as a form of punishment.
The act would involve the student being hit with a wooden paddle on their buttocks in the office with a closed door and the child shall not be struck no more three times.
The forms were sent out to kindergarten through 9th grade and the school has received a little more than 100 forms signed and returned giving consent.
Parents who do not want to consent for their children to be paddled have to agree to a five day suspension out of school.