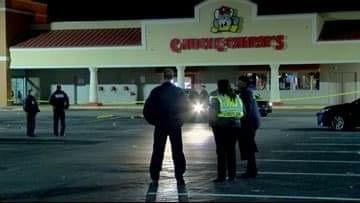 A man has died after being shot leaving Chuck E Cheese with his children Saturday evening near the South Carolina coast.
The deceased victim was identified as a 32-year-old man whose name has not yet been released.
Officer Patrick McLaughlin stated the father was leaving from Chuck E. Cheese just after 9:30pm with his children when he was shot. There were no other injuries were reported.
There has not been any arrests reported at this time.