A man has been taken into custody for the fatal shooting of a security guard at a Desoto lounge.

The incident happened Friday around 10 p.m. at the Brickhouse Lounge located on the 2000 block of North Hampton Rd.

When officers arrived they found the victim, 47 year old Derek Phillips, suffering from multiple gunshot wounds. He was transported to an area hospital where he later succumbed to his injuries.

According to reports, a patron in the lounge, Toussel Kuhn,48, was seen on surveillance video arguing with Phillips over lounge rules. He then pulled out a gun and shot Phillips multiple times before fleeing the scene.

A bystander reportedly injured Kuhn as he was fleeing the scene.

Glenn Heights police responded to a crash and determined that Kuhn was a suspect in the Desoto shooting.

He was transported to an area hospital for non life threatening injuries and is now in custody for murder. 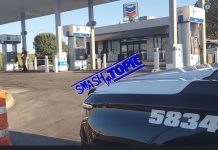