A young Louisiana boy was surprised with a brand new basketball goal after a complete stranger saw him shooting hoops inside of a trash can.
Devin Hinkston,30 was driving down the streets of Alexandria Louisiana when he spotted a young boy playing basketball and shooting into a trash can.
Hinkston says he went and purchased a basketball goal and brought it back to the residence where he was greeted by Patricia Williams and her 8 year old grandson Jeremiah. 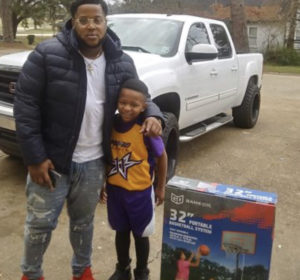 Hinkston went on to explain to William’s how he saw her grandson outside in the driveway playing basketball and wanted to give him a gift.
Jeremiah plays in a league at their local church and loved basketball. His favorite basketball player is Lebron James.
Jeremiah had a game later that day and scored 12 points helping lead his team to a victory.
Williams took a picture of Jeremiah and Hinkston and posted it to Facebook where it has gotten thousands of views.
Hinkston stays in touch with the family and plans to go back to the house to help them assemble the basketball hoop.
He says his ultimate dream is to one day fund a nonprofit for the kids in the community so they have activities to do after school.