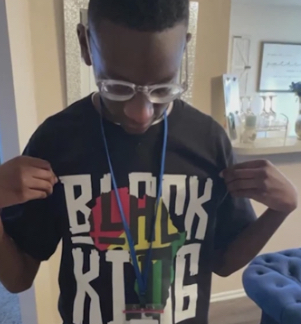 Latrell who attends Heartland Middle School, was excited to go to school to show off his brand-new birthday outfit.
“It was a shirt that said Black King,” said Latrell Taft, who is in middle school.
His day turned upside down when Latrell’s teacher approached him about his T-shirt.
Latrell said his teacher told him, if she had a shirt that said “white queen” on it they she would have been called a racist. Adding that she then called him a racist.
The mother of Latrell, Melisa Shirley is still emotionally distraught by the situation.
“I’m still shocked as Latrell stated. From a school district that I thought loved, trusted the teacher, and trust my son to go to school there every day,” she said.
Melisa told news reporters that the school was not responsive as she would hope when she initially informed them about what happened.
After posting the situation on Facebook, Melisa captured the attention of thousands of people who left comments and shared the post.
“I want her to educate herself. Even though she is an educator she is not educated herself,” said Melisa.
Edmond Public Schools released a statement saying:
“Upon becoming aware of the incident, the school and the district began a prompt investigation which is ongoing. We are continuing to assess the need for more training and professional development.”
Latrell has plans to return back to school but does not want his teacher to come back.
“I Just don’t want her to be my teacher anymore. I don’t feel comfortable with her working there,” added Latrell.
Melisa and the school met for a meeting on Thursday morning.
Melisa said she is expecting a public apology to her son and also wants the teacher to be reprimanded.