32-year-old Samuel Parsons-Salas is a convicted felon who has been on parole. Over the weekend, a fatal shooting occured at a birthday celebration at a bar in Chicago, and Parsons-Salas has now been charged in the matter.

Documents show that Parsons-Salas had been released from prison in September after being incarcerated for home invasion.

On Monday, he was apprehended, and on Tuesday he was charged.

Authorities say that on Sunday, at around  2:30 a.m., the shooting happened at a birthday party for the bar owner’s niece.

Parsons-Salas is said to have been invited to the celebration by someone else. During the party, he was asked to leave at some point.

Authorities say that camera footage reveals Parsons-Salas going to a car and getting a gun.

When a fight started outside, Parsons-Salas started shooting at the victims.

The niece was seriously hurt, and her father, 50-year-old Ricky Vera was killed. 26-year-old Mario Pozuelos and 24-year-old Mercedes Tavares, the daughter’s friends, were also killed. 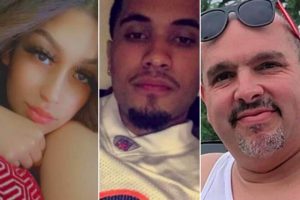 Reports indicate that Parsons-Salas stood over the victims as he killed them. He then left the scene in a dark-colored SUV.

Because a woman was in the vehicle, and he wouldn’t let her out, he was also charged with kidnapping.