65-year-old Betty Smith says she was assaulted by three grocery store workers after finding a $50 bill on the floor. The clerk demanded Smith, hand the money over, and when she refused, locked her in the store preventing her from leaving. “I told the cashier, look here, my lucky day!” Smith says. “The woman at the counter says, ‘Oh no, you can’t leave with that…that might be my friend’s money. He was in here earlier.’”

“They went to the door and locked me in,” Smith says.

Video of the incident reveals that a female employee grabbed the bill from Smith’s hand. When Smith attempted to fight back, another male and female employee shoved her. Smith said they called her racial slurs and told her she couldn’t leave. Smith says her son, who has special needs, was waiting outside in the car.

Smith then called her granddaughter Dezteni Cyrus for help. “She was frantic,” says Cyrus. “I rushed out of the shower and put on a robe. They wouldn’t let her out. She’s a diabetic. I could see where her feet were bothering her…her shoes were across from her…I said, ‘y’all have to let her out!’”

Store employees called the police, who cuffed Cyrus. When Cyrus’ mother arrived, she was also arrested for allegedly attacking one of the clerks. The family says the store employees were given the opportunity to make statements , but they were not given the same opportunity.

Lindemann’s store manager says the employees involved were fired the next day. “They offered to help pay bond money and offered to give me the $50 bill, and any support I needed, but I didn’t want it,” says Smith. “I feel like when things quiet down, the same thing is going to happen to me again.”

“On January 15, 2023, at approximately 7:05 p.m., the Austin County Sheriff’s Office responded to the Lindemann Store in Industry, Texas for a disturbance in progress,” says Sheriff Jack Brandes. “Deputies arrived and conducted an investigation in to the cause of the disturbance. One subject was arrested at the scene who was not initially involved in the original disturbance, but who walked in to the scene later and assaulted a victim. This secondary assault was captured on camera as well. Currently, the statements, videos, body-worn camera video, and all evidence collected has been forwarded to the Austin County District Attorney for consideration of potential charges against various individuals.” 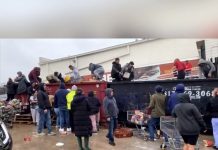 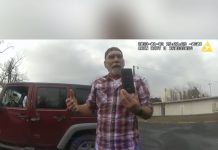 Video: Full body cam footage finally released of when Paris police told man to do something about it when he walked up on him...