California police arrested a 22 year old woman for the September slaying of her 18 year old sister and newborn niece.

According to reports, on September 24 officers responded to a shooting call on the 2500 block of South Fruit Avenue.

Upon arrival they found 18 year old Yanelly Solorio-Rivera shot to death in her bed with her baby Celine in her arms. Both were pronounced dead at the scene. 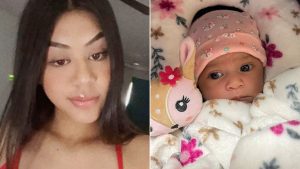 During the investigation officers interrogated Yanelly’s sister and boyfriend, who later admitted to the killings.

Fresno Police Chief Paco Balderrama released a statement saying, “We can now say with complete certainty that we have those responsible for this homicide in custody. We have the murder weapon, a Smith & Wesson 9mm handgun, and we have a motive — jealousy and sibling rivalry.”