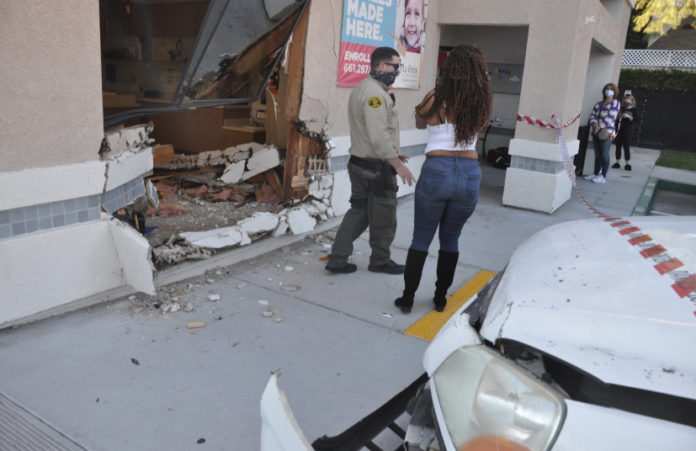 A vehicle slammed into a wall leading to classroom full of children at a daycare center just north of Los Angeles on Monday. Three children were transported to the hospital for evaluations, however, there were no major injuries reported according to investigators.
911 was called a little after 4:30 to the facility, La Petite Academy, located in the Saugus area of Santa Clarita officials say.
Footage was captured from a helicopter overhead showing the area and the damage to the vehicle. There was a big hole in the window area of the one-story building. The daycare is located just 30 miles north of downtown Los Angeles.
The academy said in a statement: “a school family member’s vehicle” had struck the building and drove through wall into the classroom.
The children were airlifted by helicopter as a precaution though deemed injuries were not severe. The children were all under the age of 4.
“When it went through, it landed on her. They found her underneath the bookshelf, but she was left with only a minor scratch.” Steve Adler said who is the father of the 2-year-old child.
He held her in his arms as he told news reporters about the experience.
“You got to ride in a helicopter, right, sweetie? She was singing the whole time,” he said.
The alleged driver as also taken to the driver with minor injuries according to police.
Immediately following the incident, the school was evacuated and closed for the rest of the day.
Police officials are still investigating as to what caused the accident.