A U.S. Navy Lieutenant was arrested and charged with first-degree murder after killing his pregnant girlfriend in Virginia.

On July 21, a body was found in a ditch in Hanover County that was later identified as 20-year-old Raquiah Paulette King. 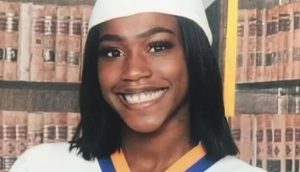 On August 15, officers arrested U.S. Navy Lt. Emmanuel Dewayne Coble, 27, since it took a while to identify the victim, according to police.

Coble and King were in a relationship and King ended up moving with him to Virginia. Sometime after the move King got pregnant and Coble insisted she got an abortion, according to Gregory King, a family member of the deceased.

After several heated arguments, King decided to have an abortion at 3 months. While at the clinic she changed her mind about the abortion and wanted to keep the baby. Coble became furious which resulted in him fatally shooting King and dumping her body on the side of the road.

Coble was additionally charged with use of a deadly weapon to commit murder. Also, Prosecutors say they will attempt to bring up additional charges pertaining to the death of the fetus.

“The Navy is cooperating with law enforcement agencies involved with this case, and we extend our deepest sympathy to the family and friends of the victim,” Lt. Commander Robert Myers, public affairs officer for the Commander of the Naval Air Force Atlantic fleet, wrote in a statement pertaining to the case.